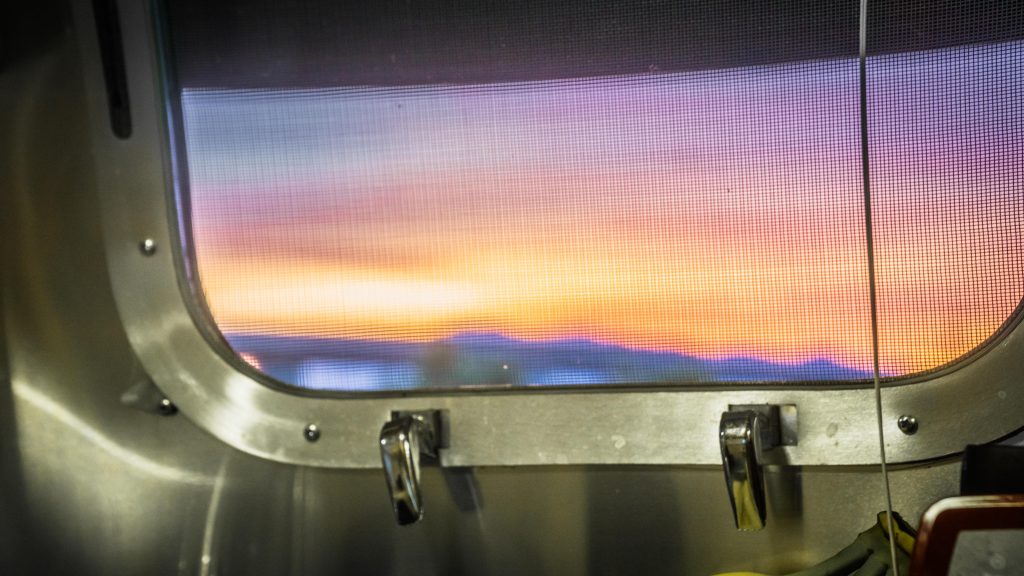 So we’ve done it! We have moved out of our 1500sqft. sticks and bricks house and into our 200sqft. 2005 Airstream Classic Limited Trailer. Our Airstream Life has begun and the verdict is….

So I guess I should start at the beginning and tell the story of how we began our Airstream Life this past weekend.

Picking up the airstream

On Thursday morning we woke up bright and early and piled into Clifford, the big red truck, for the 2 hour drive up to Mesa where Charlie, the Airstream, awaited us. Steve’s dad came along as our resident RV expert and the three of us chatted about our upcoming adventure and what we could expect. We pulled into the dealership right behind my dad who came down to help us hitch up and see how well Charlie cleaned up. The excitement built as our salesman led us out to the back of the dealership.

Hitched up and ready for our first drive!

We had already picked out and paid for Charlie the month before but this was the first time we got to see him with a full detailing. He cleans up nice! We spent the next 2 hours going through every little detail on both the interior and exterior. How do all the lights work? How do we run our fans? How do the awnings work? A lot to learn! Then finally it was time to try and hitch up. We decided to go with a hensley hitch which was pricey but apparently is the best hitch out there (only the best for our new home!). The process of getting Charlie and Clifford hitched together took another couple of hours and quite a bit of work by Steve but success! Now came what Steve had been looking forward to the most… the drive! We said goodbye to my dad and the three of us hopped back into Charlie and pulled away…

Heading down the highway with our home behind us!

Now while Steve was looking forward to this moment for weeks, I’ve been kinda dreading it. Don’t get me wrong, Steve is the best driver I know. I trust him more than anyone else to drive me and our home. And I knew that Clifford, the big red truck, was more than fit for the job. Steve and his dad had already played with the air pressure system, the towing mirrors and the trailer braking system so we knew we were golden. However this was HUGE. This was towing our home for the very first time!

I’m happy to say that the drive went fabulously! Steve took the turns wide, signaled like the big trucks, and took it slow (but not too slow). Soon we were cruising down the highway while the hensley kept us from feeling anything from Charlie, even though it was a breezy day. We decided to make a quick stop at an abandoned outlet mall in Casa Grande so Steve could practice backing up the trailer. I got out of the truck with Steve’s dad and we worked on signalling Steve into and out of different angled “parking spots”. Steve did great! I will definitely need to practice being his guide for our future adventures!

Mostly it was a smooth drive. We had a little incident with flying hay bales on the highway but luckily most of the debri was in a different lane. That was a close one! Steve successfully maneuvered Charlie onto our cul-de-sac, in front of our sticks and bricks house on Thursday afternoon. His big jobs were done for the day. Mine was just beginning. Time to move in.

Moving in & moving out

Our new home parked in front of our old home

We had been downsizing and getting rid of things for months for this exact moment. Thursday evening through Friday early afternoon I moved most of what we will own into our new Airstream home.

Our first meal in our new home. Takeout while we move stuff in.

For a recovering perfectionist I actually didn’t plan this out too hard. I looked at it as a puzzle rather than an insurmountable task. I would tell Steve things I knew we would need this week, or wanted to keep and he would carry them out to the Airstream. Then I got to figure out where in the world everything went. Let me tell you. I knew the cabinets were small.  I knew storage was tight. What I didn’t think of was the fact that the Airstream’s walls are curved. So the backs of the cabinets are curved. Extra challenge!

By Friday at noon we were moved in! Granted there is a lot still at our old sticks and bricks including all my baking supplies, my guitar, my yarn stash, all the paperwork I haven’t scanned etc. We will be going back to the house to keep it buyer ready at least once a week and will move things down as we go. But most of what we need is moved in, including ALL of our clothes, our coats, our hiking supplies, most of what we need to cook, and Steve’s office. And believe it or not we still have empty cabinets! Once we’ve settled on how we are organizing you can anticipate a series of videos on our Youtube channel and here about how to organize your entire life in an Airstream!

Once we moved all our stuff in, officially making Charlie our new home….it was time for us to move down to where we plan to park our home for the foreseeable future. So I hopped in the truck with Steve and the girls and we took another drive, this one to our semi-permanent spot at the local KOA.

Arriving at our site: The Start of our Airstream Life

All setup! Us peaking our from beneath our Airstream home.

Now it was time to take what we learned at our practice sessions and put it to good use. After Steve checked us in we drove over to our new site. We picked it out specifically for it’s nice shade tree…which will prove to be important in the Arizona summer! I got out of the truck and motioned for Steve to back the trailer in. He did a great job! It took a few tries to perfectly align Charlie with our concrete patio but once done, Steve and his dad started working on getting everything on the outside setup. You can checkout Steve’s post all about it on thinksaveretire.com. Meanwhile I went inside and got windows open so I could bring the girls in from the truck. They were super confused but settled once they realized I wasn’t going anywhere.

We had our first oopsie learning moment about travel days. I knew that things moved around A LOT more than we might think while towing so I stuffed cabinets that weren’t quite full with towels to keep things from moving too much. I also moved anything fragile into areas where they wouldn’t break. All cabinets were locked. The fridge and freezer were locked. The shower was locked. I thought I was set. When I first opened up Charlie there was a distinct smell of vinegar. It turns out that one of the squeeze bottles I used to store our apple cider vinegar hadn’t been as secure as I thought. It fell over in transit and vinegar spilled down from the cabinet onto the dinette seat. Those were patted down and put outside to dry. It could have been a lot worse! The balsamic was right next to it! I know I need to secure those better next time. I also opened our tea and coffee cabinet (yes we have one of our few cabinets completely devoted to tea and coffee) and the bottom of Steve’s Aeropress fell out. Later that night we realized his metal filter was missing. We looked and looked and couldn’t find it anywhere. You would think it would be easy to find things in such a small space! O well. Amazon Prime to the rescue and another learning moment for us.

Inside our new home

By the time I was all setup on the inside the guys had finished setting up our electricity, water, sewer and everything else outside. Charlie, the Airstream, is now officially our home.

We had the weekend to settle in and learn about our new home. We’ve already moved things around in some cabinets and are planning a trip to the container store in the near future for a few organizational elements. However in general we’ve already setup a routine. I have my spot on the couch. Steve has his office (the dinette for now). We know we need to turn the furnace on still at night (that’s a story for another time) and the AC on for a few hours in the afternoon if it’s not breezy. The girls love the dog park and our walks around the campground multiple times a day. We’ve already slowed down. Even with still having to work full time jobs and keeping up our sticks and bricks for a hopefully quick sale, we’re feeling the call of slow living that drew us to this life and we’re heeding it.

For now we are experiencing each new day, one at a time and enjoying them. I’m sure we have A LOT of learning experiences ahead of us and I can’t wait to share all we learn in the future with all of you.

You can checkout Steve’s take on this weekend on thinksaveretire.com.

Do you have any specific questions about our Airstream Life so far? Comment below or shoot me an email at [email protected] . I would love to hear from you!

Coming Soon: Our first Astreaminlife video on our youtube channel

Steve is putting the finishing touches on our first video now. I will post as soon as it’s ready! This will be the first of many and I hope you join us on this journey through our Youtube page.

This site uses Akismet to reduce spam. Learn how your comment data is processed.

BACKED BY THE BEST

Our Page or Join our Group!